Puget Neighborhood is a large single-family neighborhood interspersed with multifamily
residences, a large mobile home park, a commercial node at Lakeway Center, the Civic
Field public recreational complex which serves the entire city, and considerable
industrial development along Whatcom Creek at the north end of the neighborhood. 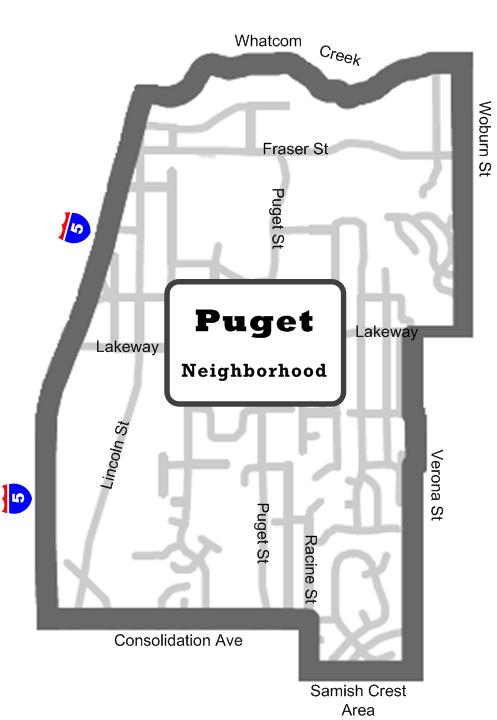 While Lakeway Center, a designated city “Town Center” is almost completely
developed, there is room for additional commercial or industrial development in other
parts of the neighborhood southward toward the I-5/Samish interchange and in Areas
14, 18, 19, and 20.

Puget and Toledo Hills occupy the southern and eastern parts of the neighborhood and
are developed with single-family homes on medium-sized lots. Many have excellent Bellingham Bay or Canadian Cascade views. In the past 40 years, streets, utilities, and residential development have extended south and north of Lakeway. In some cases, this has resulted in full standard new street sections feeding additional traffic onto Lakeway Drive via older, substandard street sections.

North of Lakeway Drive, the neighborhood drops down to a large wetland/flood plain
area associated with Whatcom Creek.